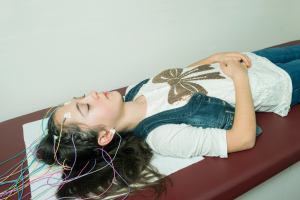 Doctors often wish they could do a quick “Google” to figure out what ails their patient--and John Hopkins Pediatrics is hoping to get them one step closer. The hospital is compiling a database of various pediatric neuroradiology images, which will allow medical professionals to compare their findings against patients with confirmed diagnoses.

When an MRI scan uncovers an unfamiliar shape or architecture in the brain of a child, their doctor may feel a bit of panic. The abnormality may be a sign of illness, or could be completely benign. Because of the delicacy of the brain, it can be difficult or impossible to take a biopsy; often the test is all the doctor has to go on when making a diagnosis.

"We're creating a pediatric brain data bank that will let doctors look at MRI brain scans of children who have already been diagnosed with illnesses like epilepsy or psychiatric disorders," said Michael I. Miller, a lead investigator on the project. "It will provide a way to share important new discoveries about how changes in brain structures are linked to brain disorders. For the medical imaging world, this system will do what a search engine like Google does when you ask it to look for specific information on the Web." (Science Daily)

Partnering with engineers, this database will be hosted “on the cloud,” and available to any professional with an internet connection. The project is being supported by a 36 month $600,000 grant, provided by the National Institutes of Health. Miller is assisted by co-lead investigator Susumu Mori, a professor of radiology at Johns Hopkins School of Medicine. Mori specializes in the study of the brain’s anatomical structures that are captured in MRIs.

The database has the potential to drastically change the workflow of neurological diagnostics. It’s known that certain identifiable abnormalities play their part in specific brain diseases, making images of these structures available to assist in diagnostics around the world could lead to a global jump in both productivity and accuracy. The images will further help in the research of the pathology of neurological disorders, as it will greatly ease the process of comparison between cases.

There is expected to be more than 5000 images in the database once it is released - nearly every pediatric neurological patient treated in the past 4 years at the hospital. Identifiable information will be withheld, but diagnosis and relevant medical information will be presented with each image to aid viewers. The data will be searchable by up to 1000 structural measurements in 250 regions of the brain, and will be pre-sorted into 22 brain disease categories. Some of the categories already set are chromosomal abnormalities, congenital malformations, vascular diseases, infections, epilepsy, and psychiatric disorders. There will also be images of neurological damage via physical injury, which will encourage medical practitioners to question whether an unusual formation in an MRI is noteworthy and could result in further complications, or a benign abnormality present before the event.

We hope that this database will be as useful to the practice of neuroradiology as its potential indicates, and that it signals the beginning of a more collaborative future for the medical profession as a whole.

Read more about the database from John Hopkins here.