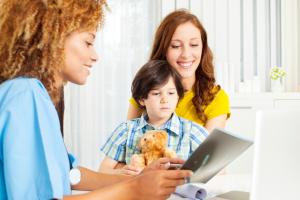 One of the biggest concerns that the public has with diagnostic radiology is the radiation that an often already sick body is subjected to. But researchers at Johns Hopkins believe they have developed a new way to scan children, and soon adults, without this danger.

Studies of alternate diagnostic tests have focused on youth thus far because those under 40, especially children who are still growing, face more danger from radiation than older patients. Because their cells are still dividing, their DNA is more susceptible to disruption, not to mention their simply having more years in which to develop tumors. But with this new way of scanning on the horizon, medical professionals will no longer have to make a judgment call between thorough diagnostics and possibly inducing cancer later in their patient’s life.

Over the years, the required radiation dose has significantly decreased, though it has not been eliminated. New findings lead radiologists to believe that using a contrast agent, ferumoxytol, would work with similar effectiveness when used in conjunction with an MRI, though the practice has not been perfected yet.

The cost of the test would not change significantly, but there would be an almost complete elimination of possible side effects, without any sacrifice in quality of result. The only possible danger would be an allergic reaction to the contrast agent; however, reactions can be quite serious. The contrast agent is essentially an iron supplement, so those sensitive should take caution.

Though the procedure is still under scrutiny, it seems that radiation free scanning is imminent. Researchers completed tests on 22 patients ranging in age from 8 to 33. Each patient was known to have malignant tumors (lymphomas and sarcomas). Using the new MRI test, they found a total of 158 tumors; with traditional PET and CT scans, they found 163. Identical recommendations would have been made if treatment decision was based on each of these tests.

Medical practitioners and researchers alike are excited about the possibility of bringing a safe way to give children and adults full body scans without possible carcinogenic side effects. In the future, there will be no need for doctors to weigh the value of a full body diagnostic test against the radiation dispensed by the procedure. This means that it will be easier for at-risk individuals to be tested regularly without compromising their health or dooming them to future of illness.

Read more about the development of this procedure by Stanford University here.